The Upper Thames Valley Sunday League (UTVSL) and all accompanying cup competitions have been voided for the rest of the season following the global COVID-19 pandemic.

Thanks to all those who were involved with JET this season both on and off the field.

With last Sunday’s match postponed, we conclude 2019 at JET.

It’s been a largely disappointing year in terms of results, but we have to be thankful that the club is still running having acquired a number of players over the summer.

JET has recorded three wins in all competitions this season and has a semi-final to look forward to in the new year, as well as over half of the league’s fixtures.

But for now, we rest up, and wish everyone associated with JET FC a Merry Christmas and a Happy New Year! 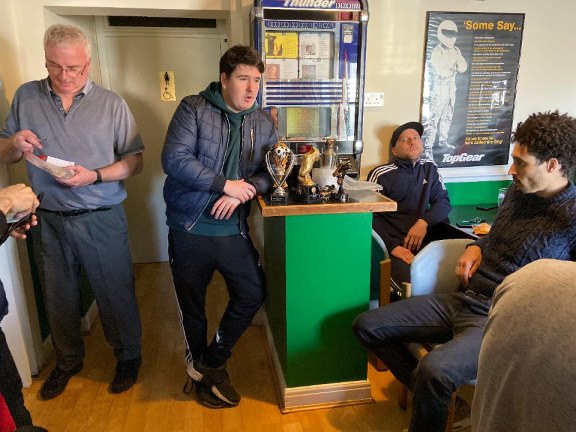 We hosted our [late] annual awards presentation at The Railway Inn on Sunday, as the previous season’s trophy winners were announced.

Congratulations to the following, winning players:

Most Man of the Matches – James Broughton

A further shoutout to Grant Robinson, who came agonisingly close to winning Players’ Player by one vote.

We go again this year, boys!

To see us crammed inside the smallest room enjoying a Coke or two, visit our sister website’s photo gallery.

JET have received a bye in the Sam Waters Cup and automatically enter the next round.

If we could get one to the final that’ll be great.. 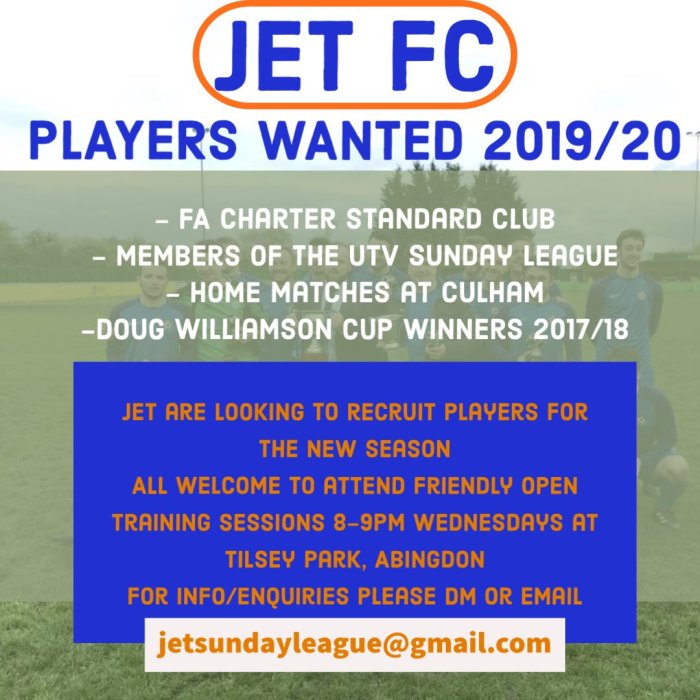 The Vets, who were playing in Didcot last season, will have access to floodlights, a substantial car park, bar, and food, as well as local pubs to celebrate their many victories.

If you’re 35 years old or above and looking to play competitive football on Wednesday evenings, why not join the good bunch of lads at JET Vets?

Sky Sports have confirmed that defender Jamie Stroud has taken over the joint-management role alongside Max O’Neill with immediate effect.

Jay has taken over Robert Padbury, who will remain playing for JET after a season in charge. We thank him for his assistance during the last campaign and hope Stroud can hit the ground running.

We have been named in Division 1 for the upcoming season.

They will be joined by the following eigh teams:

The other teams will be entered into the Premier Division.

JET’s last training session of 2018 will be next Wednesday, 19th December.

So join us – and the Vets – for a final hoorah as our last match of the calendar year has already been and gone.

Follow Geoff’s very own take on the recent JET tour in Italy, journeying through day-by-day photographs of the pre and post-tournament shenanigans.